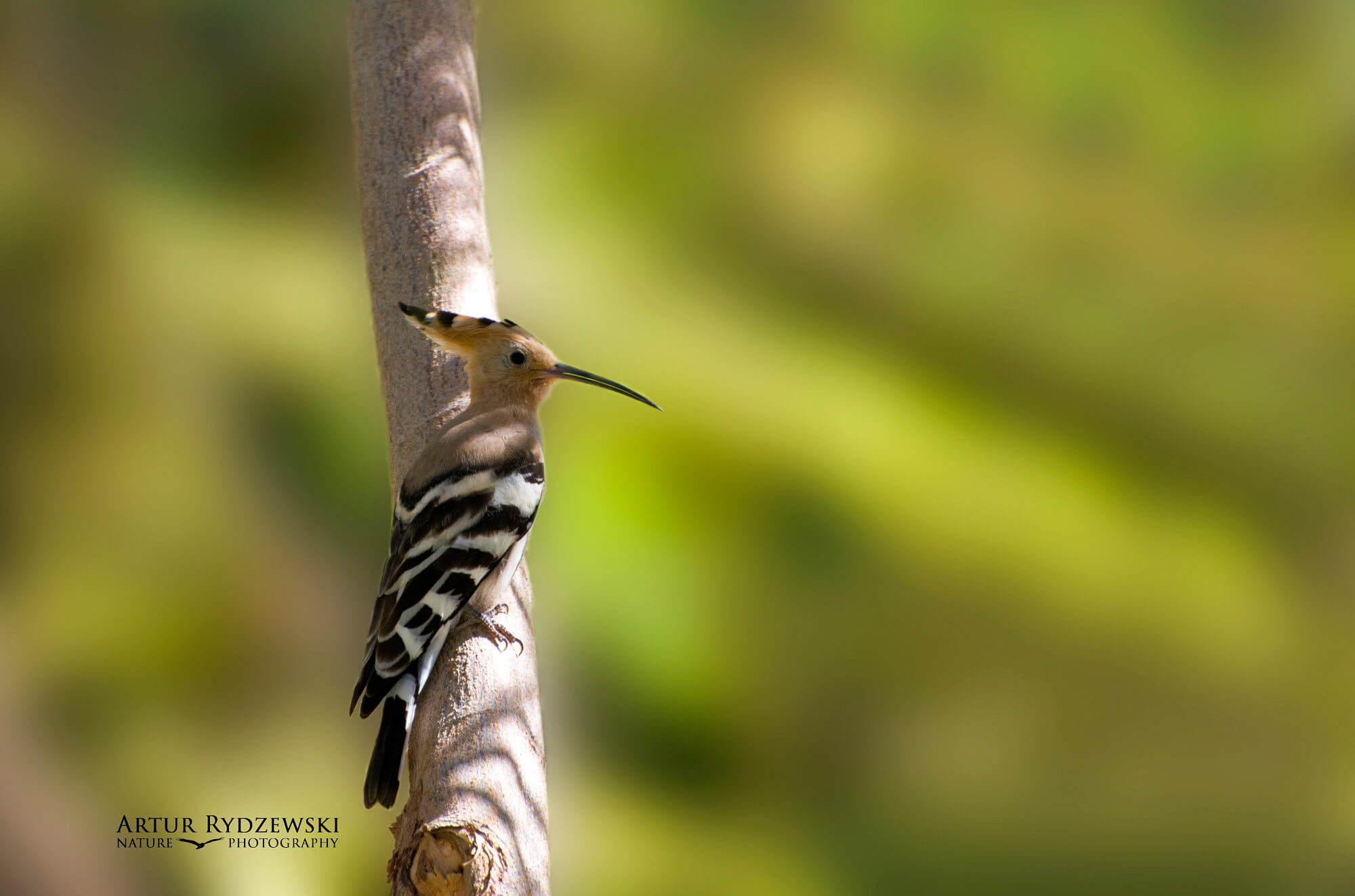 The Eurasian hoopoe – Upupa epops is the most widespread species of the genus Upupa, native to Europe, Asia and the northern half of Africa.

The Eurasian hoopoe is a medium-sized bird, 25–32 cm (9.8–12.6 in) long, with a 44–48 cm (17–19 in) wingspan. It weighs 46–89 g (1.6–3.1 oz). The species is highly distinctive, with a long, thin tapering bill that is black with a fawn base. The strengthened musculature of the head allows the bill to be opened when probing inside the soil. The hoopoe has broad and rounded wings capable of strong flight; these are larger in the northern migratory subspecies. The hoopoe has a characteristic undulating flight, which is like that of a giant butterfly, caused by the wings half closing at the end of each beat or short sequence of beats. Adults may begin their moult after the breeding season and continue after they have migrated for the winter.

The call is typically a trisyllabic oop-oop-oop, which may give rise to its English and scientific names, although two and four syllables are also common. An alternative explanation of the English and scientific names is that they are derived from the French name for the bird, huppée, which means crested. In the Himalayas, the calls can be confused with that of the Himalayan cuckoo (Cuculus saturatus).

The Eurasian hoopoe is widespread in Europe, Asia, and North Africa and northern Sub-Saharan Africa. Most European and north Asian birds migrate to the tropics in winter. In contrast, the African populations are sedentary all year. The species has been a vagrant in Alaska. U. e. saturata was recorded there in 1975 in the Yukon Delta. Hoopoes have been known to breed north of their European range, and in southern England during warm, dry summers that provide plenty of grasshoppers and similar insects.

The hoopoe has two basic requirements of its habitat: bare or lightly vegetated ground on which to forage and vertical surfaces with cavities (such as trees, cliffs or even walls, nestboxes, haystacks, and abandoned burrows) in which to nest. These requirements can be provided in a wide range of ecosystems, and as a consequence the hoopoe inhabits a wide range of habitats such as heathland, wooded steppes, savannas and grasslands, as well as forest glades.

Hoopoes make seasonal movements in response to rain in some regions such as in Ceylon and in the Western Ghats. Birds have been seen at high altitudes during migration across the Himalayas. One was recorded at about 6,400 m (21,000 ft) by the first Mount Everest expedition.

In what was long thought to be a defensive posture, hoopoes sunbathe by spreading out their wings and tail low against the ground and tilting their head up; they often fold their wings and preen halfway through. They also enjoy taking dust and sand baths.

The diet of the Eurasian hoopoe is mostly composed of insects, although small reptiles, frogs and plant matter such as seeds and berries are sometimes taken as well.

The hoopoe genus is monogamous, although the pair bond apparently only lasts for a single season, and territorial. The male calls frequently to advertise his ownership of the territory. Chases and fights between rival males (and sometimes females) are common and can be brutal. The nest is in a hole in a tree or wall, and has a narrow entrance. The female alone is responsible for incubating the eggs. The eggs are round and milky blue when laid, but quickly discolour in the increasingly dirty nest. They weigh 4.5 grams.